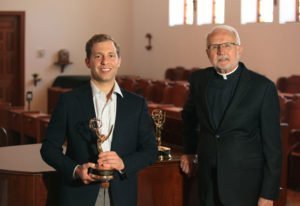 SAN FRANCISCO — The National Academy of Television Arts and Sciences SF/Northern CA Chapter has recognized Sunday to Sunday, an online and cable TV program that uses cinematic storytelling to highlight the most gifted preachers in America, with a 2020 Emmy award for Outstanding Interview Program.

The Sunday to Sunday team, led by Roman Catholic priest, retired college professor, and television producer, Father Mike Russo, along with CutFocus director, Carlos Torres, were announced winners on June 6 for their production of the episode “Father Chris Walsh”. The episode explores the Philadelphia based priest’s work ministering to an African American congregation at Saint Raymond of Penafort, something Father Walsh recognizes is critical as cities grow in diversity.

“Going back to the time of slavery, where Sunday was a day away from the experience of the oppression of slavery, they were often spending the day together and their true identity was being lived out,” says Father Chris Walsh. “I think as we minister, not only to an increasingly non-white church but also a church that has very different experiences as far as socio-economics and political experiences, what the church has done when it’s been its best throughout history is to meet people where they are.”

Since founding this non-profit just three years ago, Sunday to Sunday has focused its efforts in applying contemporary cinematic production to highlight unique aspects of Catholic ministry, stimulate conversation and bring to light the word of God. Father Russo is a longtime television producer having begun his career at CBS News, beginning in 1969 as a production assistant for Walter Cronkite’s broadcast of the “Man on the Moon, the Epic Journey of Apollo 11.”

“We’re thrilled about this honor from the Academy,” says Father Mike Russo.
“It’s truly a culmination of the hard work and support from many and a sign that our work is having an impact.”

Father Russo recognizes the impact storytelling can have on the Church, preaching, and evangelization. He is among the very few Roman Catholic priests to win an Emmy; and last year, the program garnered the Gabriel Award from the Catholic Press Association for the “Best TV Series & Storytelling.”

Sunday to Sunday is a media partner with America Media (America Magazine) and DeSales Media Group in Brooklyn. To learn more about Sunday to Sunday, visit: www.sundaytosunday.net.